Our fearless leader, George Washington, is known for his courage and his fight.

Our fearless leader, George Washington, faced challenges that stretched him to his limits. The result of facing challenges head on was that he grew into a universally beloved founder of our nation and our first president.

The three types of challenges faced by George Washington and every person that has graced our planet include:

Danger and threat of physical harm from mortal enemies

George Washington was a soldier and a patriot. While he hoped to be loyal to the crown, he was ultimately persuaded that the behaviors of the crown toward the colonies were unjust and tyrannical and therefore he could not sit idly by. He resolved to defend his neighbors and fellow citizens of the colonies.

Where other military leaders directed military affairs from the rear, George Washington led the fight from the front. He led his troops with an example of courage. Such was the case in 1755 when Washington was serving as Aide de Camp to British General Edward Braddock. In a fierce battle during the French-Indian War, General Braddock was killed under the fierce attack. Washington took command of and rallied the troops.

During the battle, the enemy shot two horses out from under Washington. Additionally, after the battle, Washington found four bullet holes in his coat. This experience and others, cultivated a reputation among the French and Indian fighters that Washington could not be killed—that he had unearthly protection against enemy fire.

In the 1977 Revolutionary War battle at Princeton, it is reported that Washington commanded his troops from horseback within 30 yards of the enemy. His raised position and close proximity made him an ideal and identifiable target for the enemy. The bullets whizzed around him and his troops worried that their leader would be shot and killed. He simply urged them to follow his example with the promise that the result would be victory!

By fighting from the front and putting himself at risk of bodily harm, he won the respect of those he led. They followed him in courage and action and as a result, they did in fact, win the battle at Princeton and the Revolutionary War.

Leaders who engage the fray from the refuge of their offices in high towered buildings miss the opportunity to demonstrate courage and to model the behavior that will win the respect of those they lead. Leaders who face threat and danger head on, with transparent courage, rally those they lead forward to victory. In the process they build legend and culture in the same way George Washington did.

Attacks from detractors and critics

When Washington accepted the charge of the Continental Army, they were ill-equipped, poorly provisioned, and lacked the training and discipline that would make them a real army. They suffered defeat after defeat. They retreated from Long Island across the state of New York and ultimately put the Delaware River between themselves and the advancing enemy troops.

For his sacrifice of leading an unprepared army, Washington was criticized by his own generals. Among them, General Lee who went to the Continental Congress behind the back of his commander. His criticism fomented similar attacks from members of Congress. The voices of Washington’s detractors dominated the press.

Rather than arguing with Congress, his lower generals, and the press, Washington found guidance from their criticism and looked for solutions to their problems and corrections for their poor performance. He set clear objectives like taking Trenton, and Princeton. He made bold plans and he and his leadership team executed the plans to great success despite difficulties and setbacks.

Effective leaders choose to battle the problems instead of the detractors. They learn from the kernels of truth contain in the criticisms against them. They adjust to set clear objectives and make plans to achieve those objectives. Effective leaders coordinate with their team to successfully accomplish their plans despite challenges.

Health challenges that were debilitating and death threatening

Washington was plagued by a variety of health problems throughout his life. He contracted and dealt with the real effects of at least six deadly diseases including tuberculosis, dysentery, pneumonia, malaria, smallpox, and diphtheria. Any one of these maladies could have resulted in his demise. Washington was able to fight off each of these threats to his health and well being.

Difficulties with health can debilitate emotional resilience and willpower. Washington did not let personal pain, discomfort, or inconvenience prevent him from doing his duty. He faithfully fulfilled his responsibilities even while fighting life-threatening diseases. One example is during the French-Indian War when he had dysentery. He was in such pain, that he actually sat on a pillow while in the saddle—actually raising him up and making him a more prominent target for the enemy rounds.

Washington wasn’t always able to fulfill every duty when health maladies struck him. Sometimes he was reduced to bed rest, despite his desire to be at the front of every fray. To his credit, he accepted the restrictions necessary and recuperated as rapidly as possible so that he could again fully engage his various roles.

In order to be an effective leader, there will be times that you will be required to work through personal discomfort, pain, and inconvenience. Persistently productive leaders will remember the age-old adage, an ounce of prevention with worth a pound of cure. Modern leaders have access to more knowledge and resources to nurture and maintain health than were available to Washington. Attacks on health can take any leader out of the game. They can also erode energy and willpower. Protecting one’s health is a worthwhile leader activity.

George Washington faced difficulties just like you and me. We can learn how to deal with our challenges by studying the example of our fearless leader, George Washington. Lead by example by engaging the fight from the front. Contend with the crisis instead of the critic. And take care of your good health.

We can all learn to be more effective by learning about our fearless leader, George Washington. 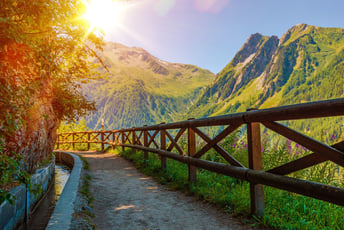 The Journey to Achievement

The noted theologian Joseph Campbell spent a large portion of his life reading and writing. Under...

Sometimes the Human Experience doesn’t always match up to what we want it to be. Whether  in...