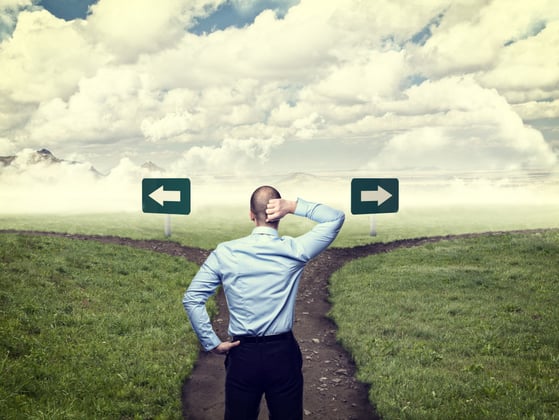 One of those principles is the use of persuasion. This is the sales cycle at its center. Individuals rarely think about how they persuade, and instead they spend their time figuring out if they are being persuasive. At Griffin Hill, through research we have learned that there are really two routes to persuasion and mastering them will boost your revenue and increase closes.

To illustrate the use of persuasion, let’s look at a few examples. The first is similar to a child’s dare. In the sales cycle it sounds like this: “So, do you want to buy?” It simply doesn’t work. This is lacking in any persuasion, yet sales people do it all the time. It is a serious “turn off” in the sales cycle. Everything you have done up to that point in the sale will be inefficacious. This frequently used method uses no persuasion route at all.

A second example is illustrated by a familiar scene. You’re in a favorite electronic store at the checkout line. When you reach the front, the employee at the register begins to sell you their rewards credit card. This is an example of using one of the two routes to persuasion which can be referred to as a direct route. It deals with impulse buying. This route touches on the emotion of the prospect and requires a low level of analysis. This doesn’t mean a low desire to buy, but rather, that deep consideration and large amounts of time is not required.

A final example likened to house buying represents the second route well. This route is the antecedent to the more direct one. It deals with a high level of analysis and includes a more complex and lengthy sales cycle. This is as it should be; people don’t want to impulse buy a purchase as significant as a house. This sale, to be persuasive, will include an intense drill down of questions to understand your prospects needs. This route of persuasion will help your prospect come to a decision and ultimately buy.

Imagine using the high level analysis route of persuasion at the counter with the reward card. Rather than taking the direct route, the employee goes on and on at the counter, running you through a drill down of questions. This always leads to the prospect saying a hurried “no” and leaving as quickly as possible. Now think about using the direct route of persuasion as a realtor. This also leads to a quick “no.” As the realtor quickly jumps to the contract, prospects get uncomfortable and step out of the sales cycle.

Persuasion is the core of sales. Mastering persuasion changes the sales game. Doing so leads to more closes, more revenue, and more goals met. Learn more about the principles of persuasion in Griffin Hill’s 5 Theory Days of Persuasion here.

Positioning is Power in the Sales Process

In the Integrity Sales System, the Positioning Play, found in the Case Open step of the process, is...

Position Yourself For Success

The Positioning Play is the second play of the Case Open Routine.  The purpose of the positioning...